Muskaan also has some posts about magic squares, which you can read by clicking here, and here. If you are interested in the origin of the magic square, scroll down to the bottom her second post.

There are two ways that I like to visualize magic squares. The first involves looking at the pattern as a group of four smaller squares, connected in the middle.


This type of visualization is helpful for designing magic squares.

Let's use my recent onion ring square as an example. Here is one square by itself: 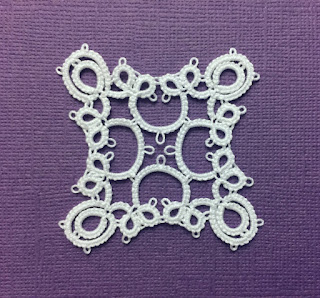 And here are four squares connected together: 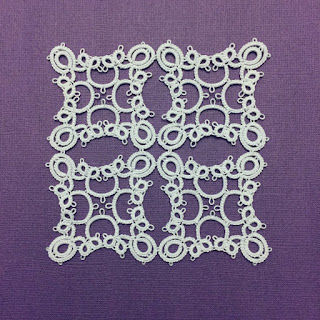 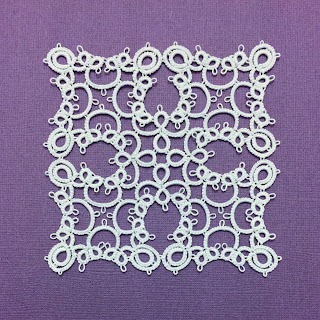 Using a simple diagram, the path to tat a small magic square looks like this: 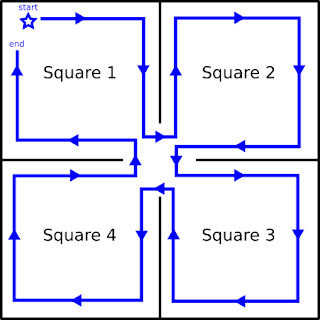 I find that it is best to begin tatting at the corner of the square. It's easier to finish the tatting on the outer edge, and this starting position also allows the square to be built up to any size.

Here are a few more examples of magic squares broken down into four smaller squares. I have boxed one small square in blue for clarity. Notice how the smaller squares connect in one continuous round in the center of each magic square: 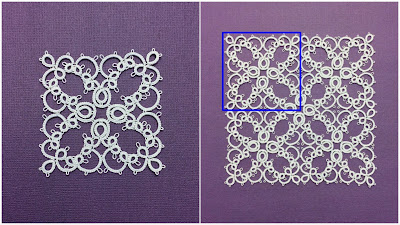 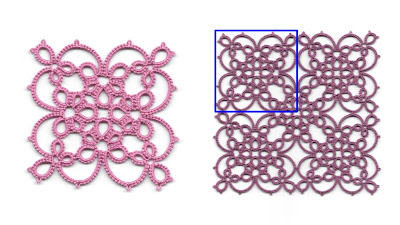 So, what happens if you take four magic squares and connect them together, using the same method pictured above? You get an even larger magic square! 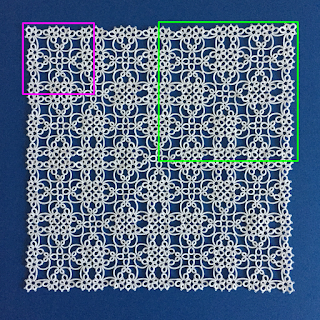 This type of visualization is helpful for tatting magic squares.

As magic squares grow, the path to tat them becomes more and more complicated. For this reason, I find that it is extremely helpful to visualize magic squares in a second way: as a series of triangles.

If you begin tatting in the spot designated "A" on my diagrams, you will find that the pattern is built up in triangular sections.

I'll go through this step by step, using my onion ring magic square as an example. The same basic stitch count is used throughout. (Please note: in the following example, "clockwise" and "counter clockwise" refer to the direction of the tatting in the photos. In practice, because tatting is worked from the front and back side, actual directions may vary).

The first section of the pattern looks like this: 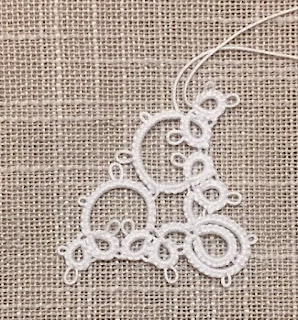 A counter clockwise turn uses an onion ring to corner, and results in a completed small square: 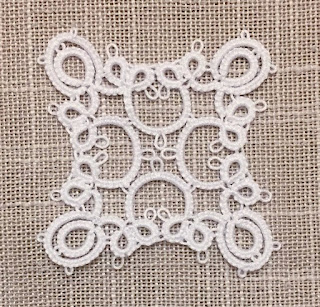 On the other hand, if I had chosen to turn clockwise to build a larger triangle, I would need to tat an inward-outward facing ring combination to corner. Here is the resulting larger triangle: 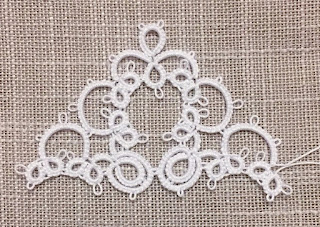 After creating the larger triangle, I am faced with the same decision again. This time, tatting in a clockwise direction will finish the square: 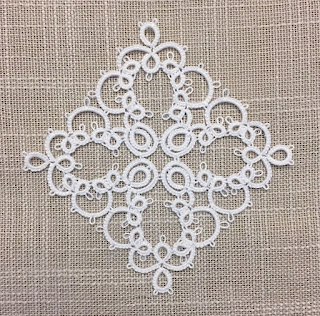 While tatting in a counter clockwise direction will build a larger triangle: 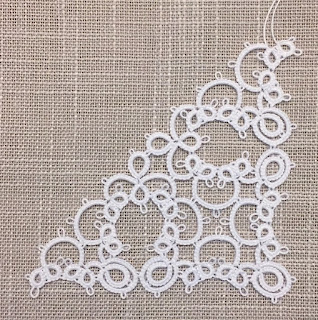 Moving on from the expanded triangle, I can turn counter clockwise to form a square: 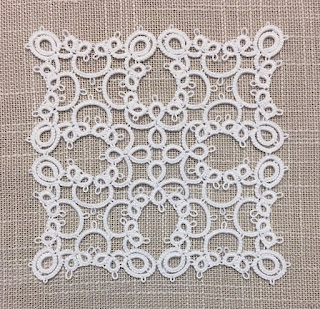 or I can turn clockwise to build a larger triangle: 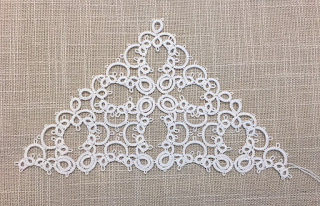 I can keep building this way indefinitely, creating larger triangles until I feel like turning to make a square. For this particular pattern, I stopped at the image below, which involved a clockwise turn to complete the square: 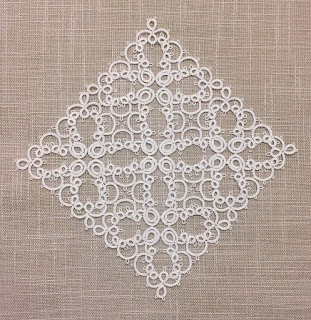 
When expanding magic squares, it can be tricky to keep your place in the pattern. Something that I've found to be helpful is to use lines of symmetry as a guide.

Let's look at some of the lines of symmetry in the large magic square pictured below: 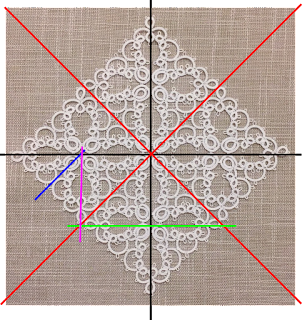 Some of the lines deal with the overall square, whereas others are for smaller sections. There are more lines of symmetry than what I have drawn. Depending on where you are in the pattern, the most prominent lines will change.

This is easiest to visualize if we use the triangle expansions that I talked about earlier. Let's start with the smallest triangle and expand it into a larger triangle. I can use this edge as a guide: 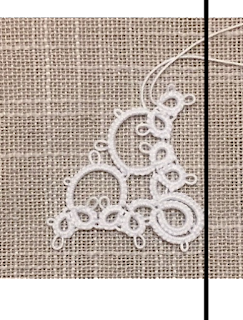 First I have to tat the corner, and then I can tat a mirror image of my previous work. The result is a larger triangle: 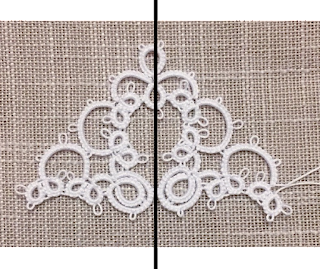 To expand this into an even larger triangle, I can use the new edge as a guide: 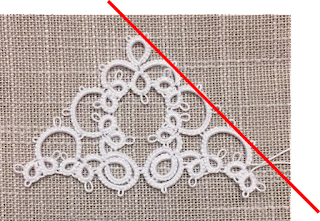 I make an onion ring corner, and then tat the mirror image of my previous tatting to form a larger triangle: 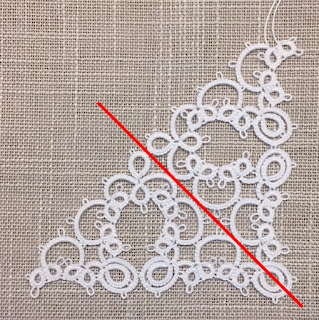 If I want to turn this into a square, I can use the other edge as a guide: 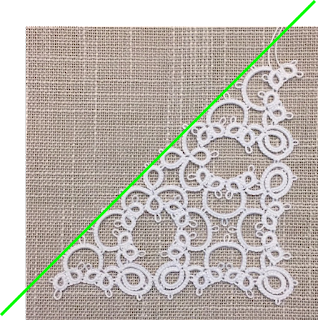 Again, I need to tat a mirror image of my previous work. The result is a square: 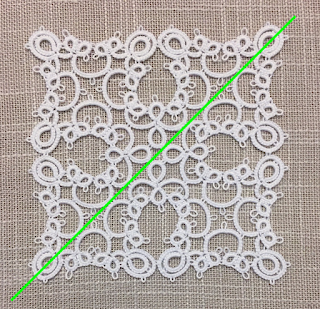 Using this technique, you can memorize the basic stitch count to tat triangles and squares without referring to the diagrams. It takes some practice, but I've found that this method works much better than trying to keep my place in a diagram.

That's all for today's post. It contains a lot of information, hopefully not too confusing. If you have any questions or find that something isn't clear, don't hesitate to ask in the comments below! For my next post I will talk in depth about how I designed the magic square pictured above.
Posted by Robin Perfetti at 1:26 PM 18 comments:

The onion ring magic square pattern is now available. You can access the file by clicking here, or by going to my free patterns page. I have test tatted and proofread this myself, but if you notice any mistakes please let me know! 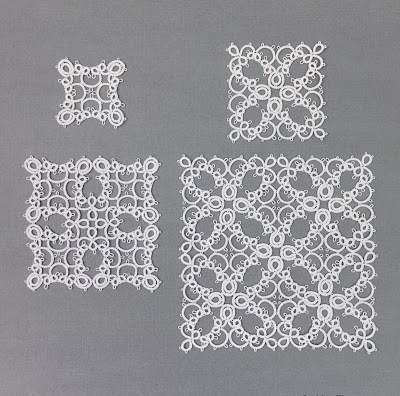 To keep everything consistent, I ended up tatting these squares in white thread. However, I think this pattern would look more interesting in two colors.

I've made this pattern free as I really want to share the idea of designing magic squares. I love that these patterns can be made all in one round and would be very pleased if more designs cropped up in the future.

I still need to write a few posts to show the design process. If all goes well, I should have a post about deconstructing the magic square next week, and a post about how I designed the square a week after that.
Posted by Robin Perfetti at 12:40 PM 23 comments:

Here is the magic square that can be created using the hidden square from last week's post: 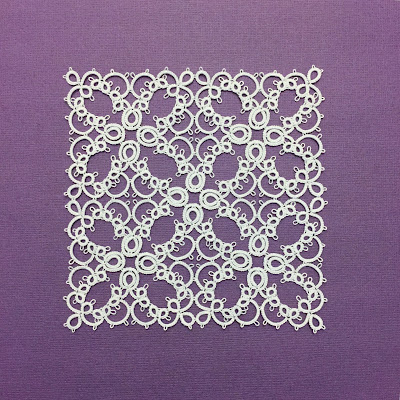 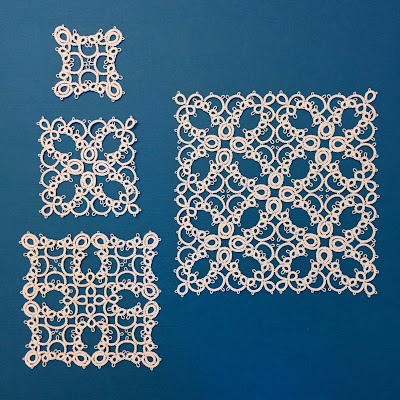 If you look at the large square, you can see several of the smaller squares within it. Using the same basic repeat, the pattern can be built up to any size, all in one round.

I won't be tatting any larger squares as I'm just using it as an example of how to design a magic square. I should have more detailed posts about the process in the next couple of weeks, and will also be sharing the pattern on my blog.
Posted by Robin Perfetti at 12:11 PM 11 comments:

Here is the square that was hidden within last week's magic square: 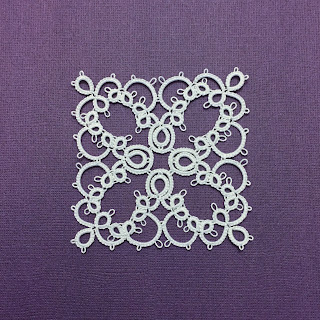 Look at the bottom right corner in the picture below. You can see half of the hidden square, outlined in green: 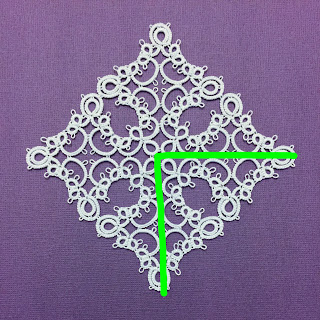 The final step is to make a magic square out of four of the hidden squares. The stitch counts are all contained in the first magic square, so no new calculations need to be made. However, it will take somewhere between 12 and 15 hours to tat. More on that in the next week or two.
Posted by Robin Perfetti at 12:21 PM 10 comments:

Well, it's time for the big reveal. This is what I've been working on for the past few weeks: 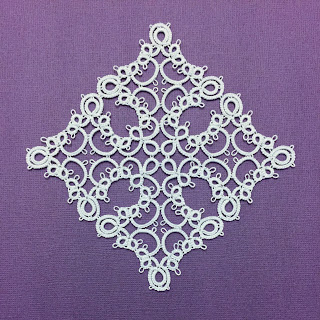 It's another magic square, this time made with onion rings. If you've been following along with my last two posts, you will remember that I started with a small square and then connected it into four squares. The last step was to redesign the middle to enable it to be tatted in one pass. Here are the three images together. Can you see how one builds off of another?

This is only a small version of the square, and it can be built up to any size from here. There is also another square hidden within this pattern. My next post will show the hidden square and then I will work on completing another magic square based off of the hidden square.

I received several guesses in my previous posts about what I was making. People were very close, and the guesses of a square doily, mat, or shawl are technically correct because this pattern can be used to make all of those things. However, I was thinking about the design in more of a conceptual way, and less so as a finished project.

My end goal is to compile a post showing how to design a magic square. I think it's a really interesting concept and would love to see other magic square designs pop up, though I know that's wishful thinking!

I will also be sharing the pattern on my blog so keep an eye out for that. It should be ready in the next month or two and will be available as a free pattern.
Posted by Robin Perfetti at 12:56 PM 13 comments: