My little collection needed another snowflake that could be tatted in one round. This one came together surprisingly quickly. It took a little over an hour to get the final stitch count, and three more hours to tat the snowflake. If only they all worked like that! 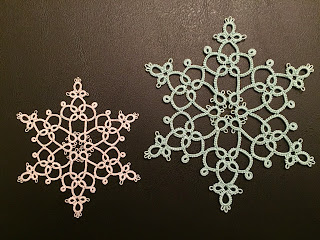 Holding the tatting up to the iPad helps a lot in determining if the pattern will work. 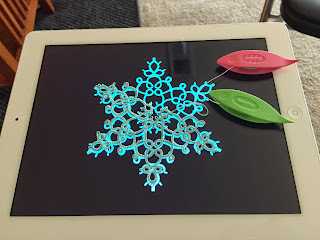 The closer I can get to the original drawing, the better my chances will be.
Posted by Robin Perfetti at 12:33 PM 7 comments:

More of the same

Not much new to post these past few weeks. I've just been working on diagramming a few snowflake patterns and tatting final versions of them in white. (The big one is Lizbeth silver size 40, the white version of this still needs to be tatted). 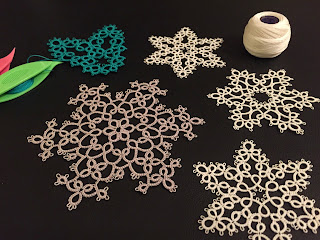 The teal colored one in the background is in progress, to be used as a pattern photo for a very minor design alteration. I've realized that there is some benefit to tatting the snowflakes in color: one can save on ink when printing out the pattern. (White snowflakes need to be scanned on a colored background).

Here's my pile of diagrams and my tatting binder, which houses all of the designs after I finish them. 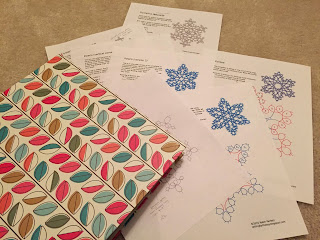 I add a sample of tatting to each binder insert, which is great for knowing what the pattern will look like when tatted...not so great for the thickness of the pages. This one will only fit 5 to 10 more pages, so I'll have to start a new binder soon.
Posted by Robin Perfetti at 12:03 PM 7 comments:

Attempts at creating a new cross design have resulted in quite a few pieces for the scrap pile: 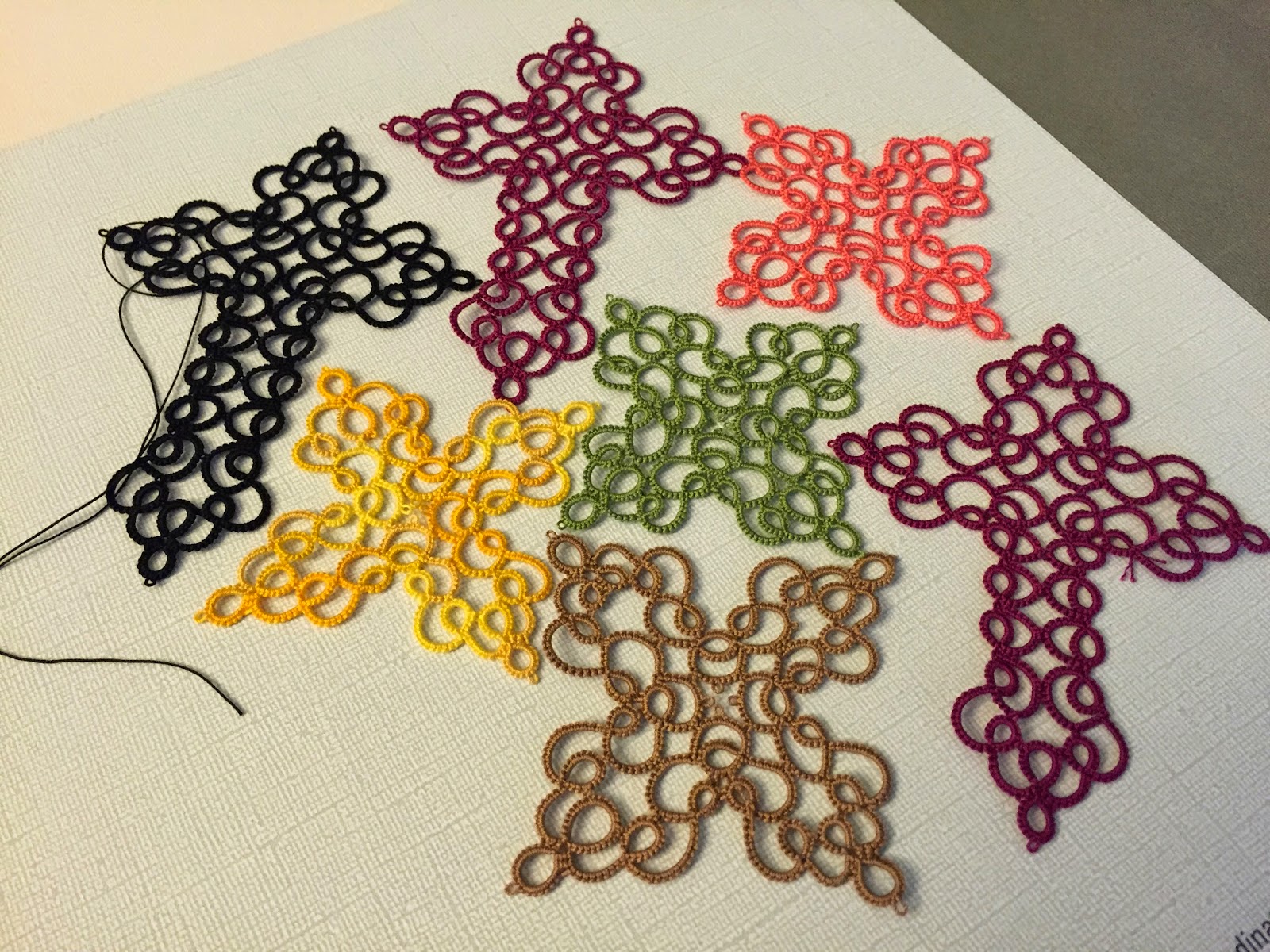 They won't go there yet, however. Not until I can come up with a finished version of the pattern that I like. I think I have enough of an idea to create a square, but the cross still eludes me. I'm trying to come up with a way to connect the bottom portion to the top while maintaining the flow of the pattern. For now, the scraps have been set aside, in a bag that recently held chocolate coins. 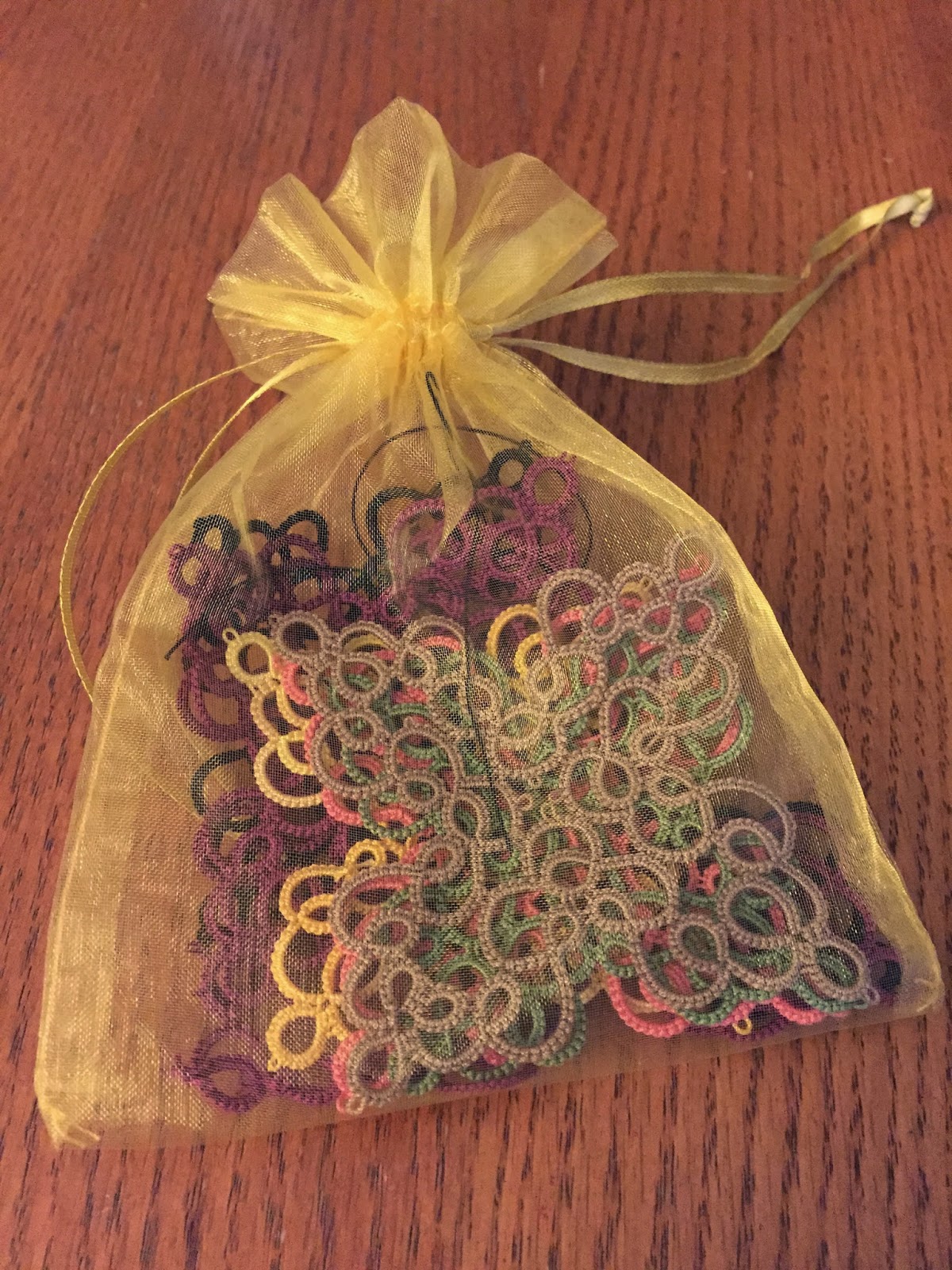 After getting caught in a loop of designing and redesigning, I decided to take a break from the cross to clear my mind. I meant to do more carefree tatting with a snowflake pattern I had drafted a few weeks ago.

As usual, I found my mind wandering, thinking of all the alterations I could make to the snowflake. This caused me to incorrectly join a ring, and as I tried to open the ring with a pair of tweezers, the thread broke! Apparently tweezers are a hazard to thread! 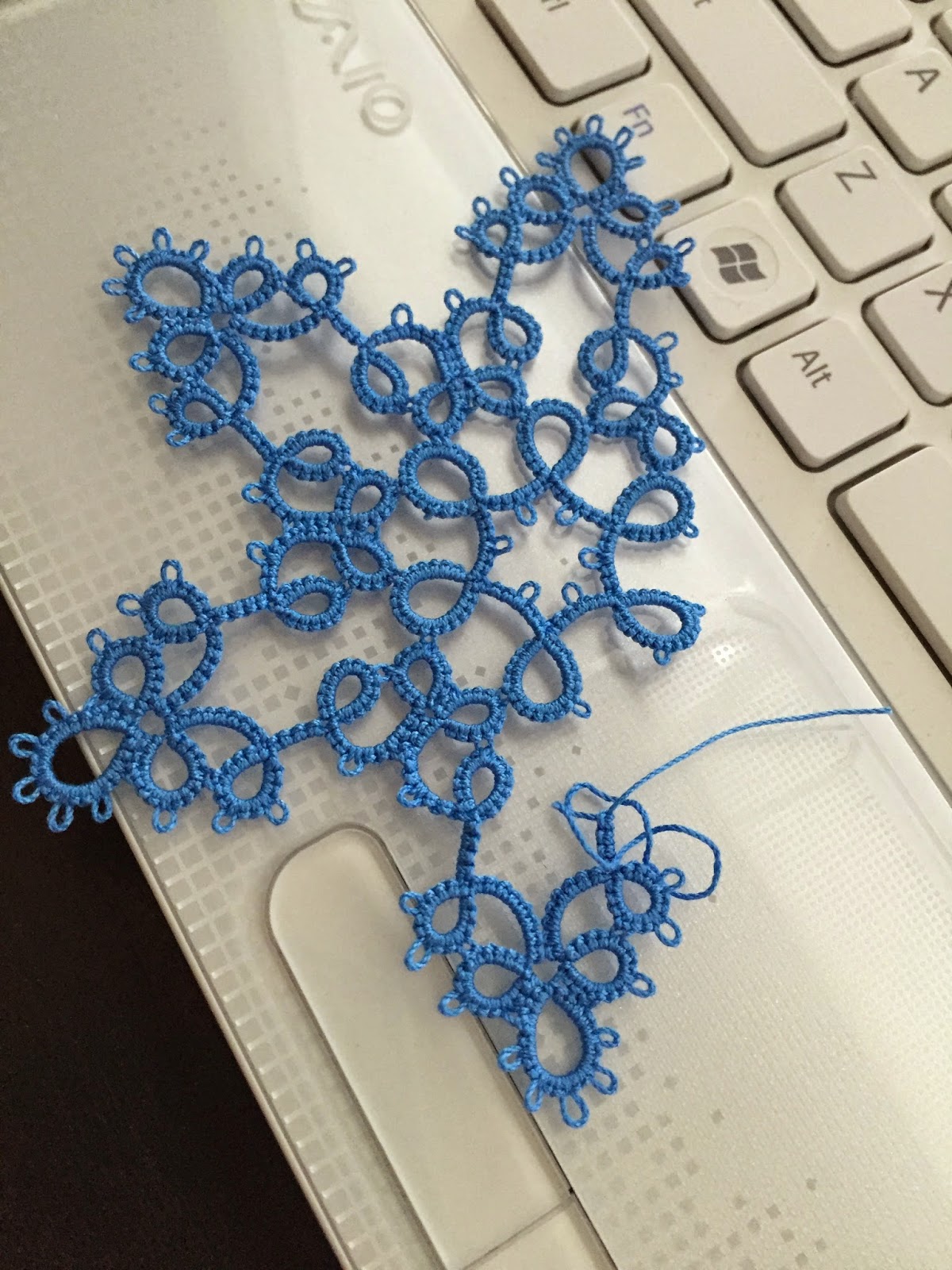 Of course I could not alter just one snowflake. The lavender snowflake was also adjusted, from two rounds to one. (On the left side are the originals, and on the right side are the alterations). 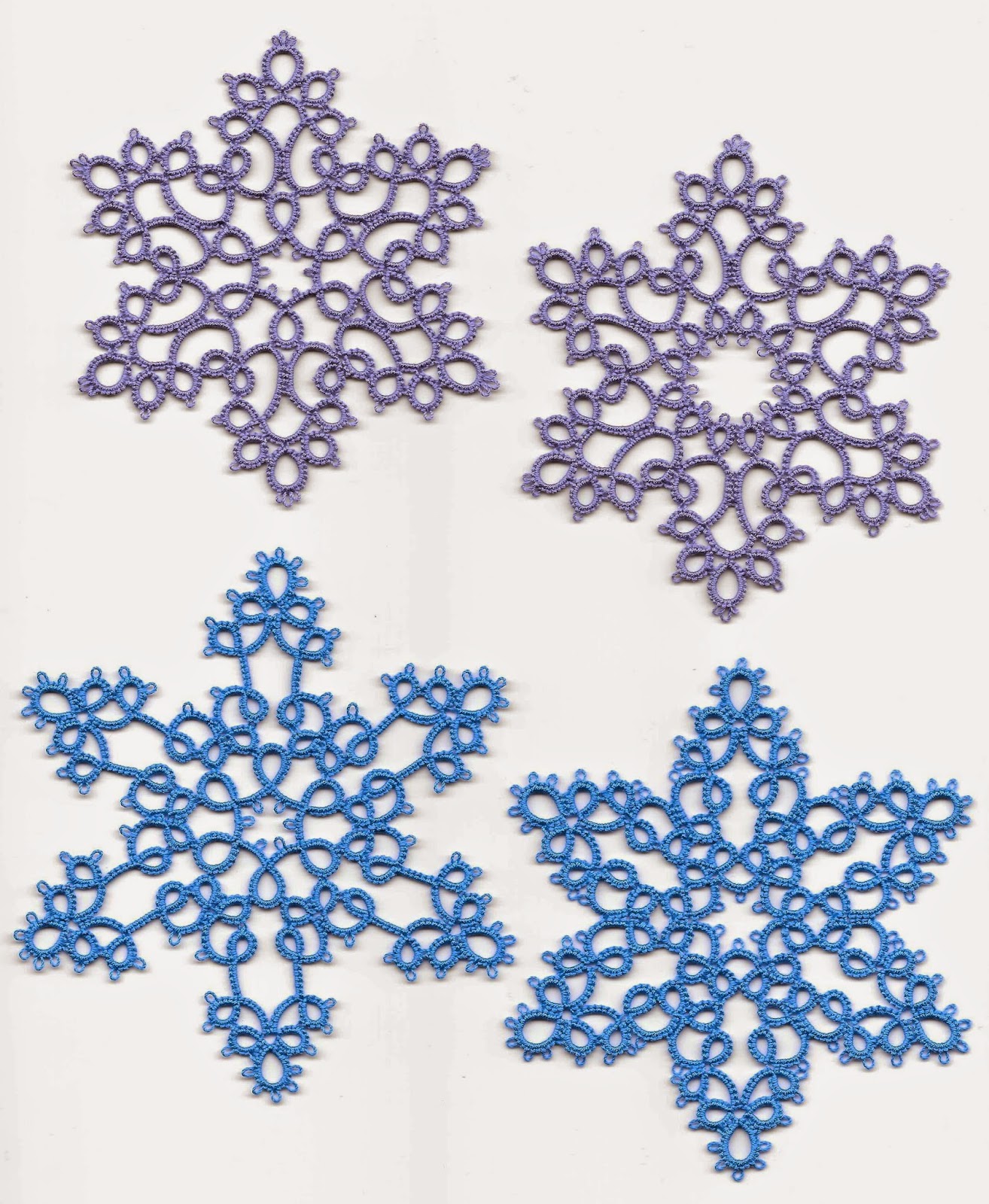 My mind is still spinning with ideas of other options and designs.

On another note, I spotted a butterfly drinking nectar while hiking around Prince William Forest Park. The photo came out surprisingly well for being taken with my phone: 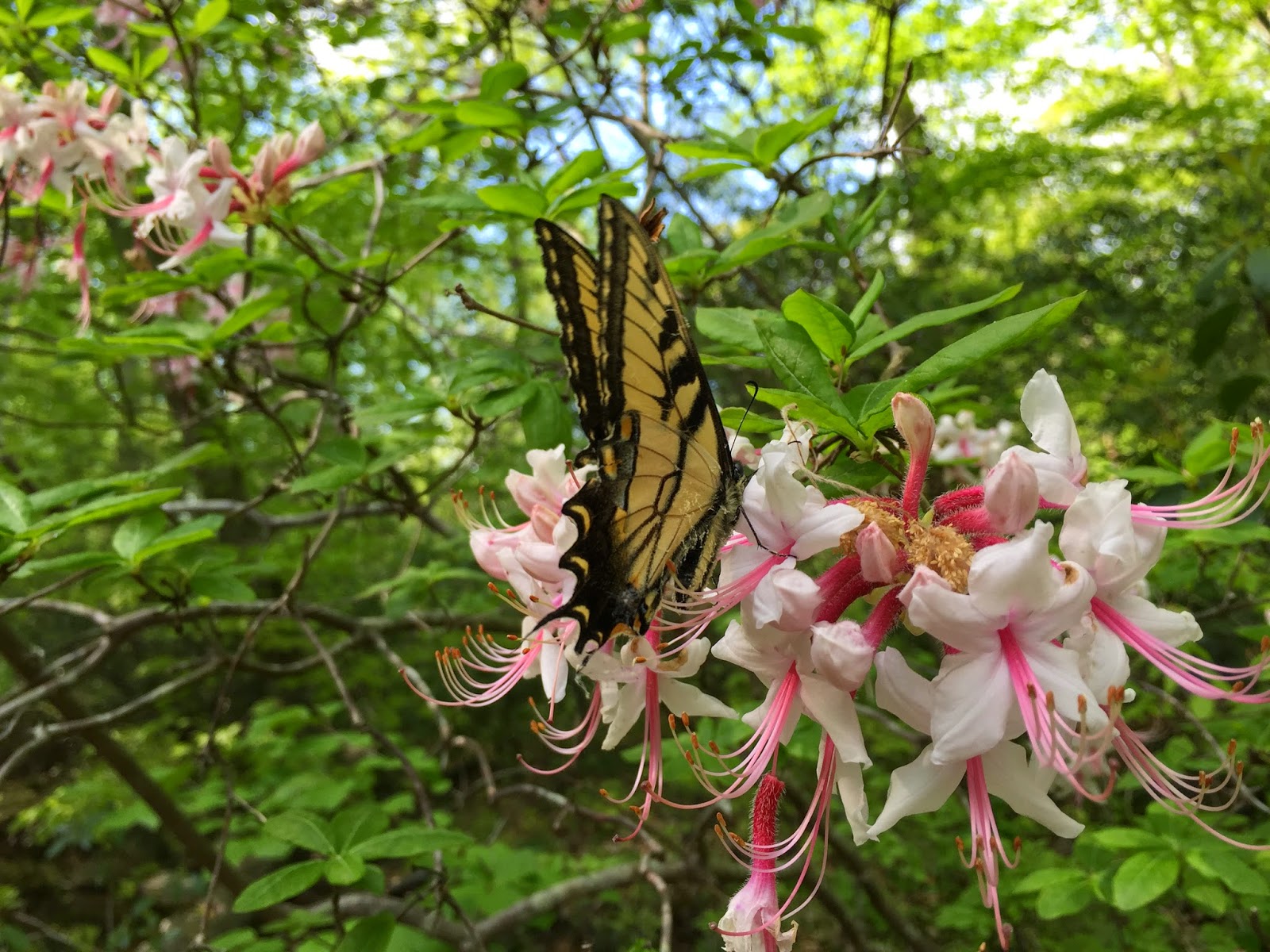