Here is yet another coaster for my collection. I used a small split ring to climb from the central rosette to the outer round, and completed the pattern in one pass. It does use a lot of thread and I needed a large Clover shuttle to hold enough of the Lizbeth size 20 to finish the coaster in one go. (By the way, if you've never tried the larger Clover shuttles I highly recommend them...they can even be used for size 100 thread and work wonderfully.) 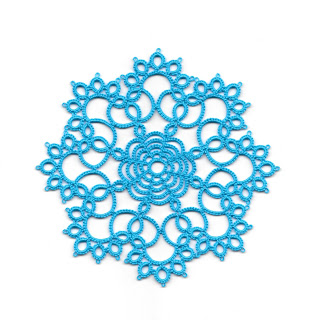 This is done in size 20 Lizbeth, #658 Ocean Turquoise Light. It's a really pretty blue and I'm going to buy another ball when I get the chance. The coaster measures 4.25 inches across.

I actually finished this pattern several weeks ago, and would have posted it earlier had I not come down with the flu. At least I think it was the flu, though I can't say I've ever had an illness that caused me to feel like I was bobbing up and down on a fishing pier for over a week. I'm finally starting to get my energy back after about 15 days with whatever it was.

I have one more coaster that I'd like to design before I start writing up patterns. It's something that I drew over a year ago and is in the shape of a square. I'm hoping to have that done in a few more weeks.
Posted by Robin Perfetti at 2:53 PM 14 comments:

As I was tatting a sample for my floral doily, I noticed a small cross taking shape. I fit the pieces together like a jigsaw puzzle and came up with this: 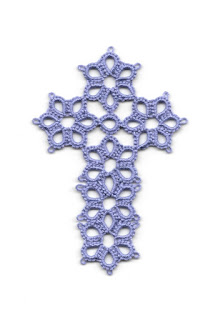 If you can tat split rings and follow a diagram, the cross is pretty easy to make. It measures 2 inches across and 3 inches from top to bottom in Lizbeth size 20 thread. Here's a diagram that I put together in Inkscape (right click and open the photo in a new tab to see a larger picture): 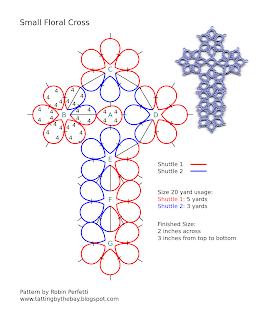 Just in case I missed anything in the Inkscape diagram, here is my hand drawn sketch: 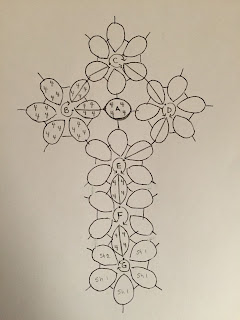 Update: Click here for the PDF file with full written instructions and diagram

This little cross is made with a stitch count of 4 between every picot. In theory, the cross can also be made with all 5's or all 6's. That's because six ringed flowers are super easy to make. Just use the same number four times for each petal. Take a look at a page from my binder below: 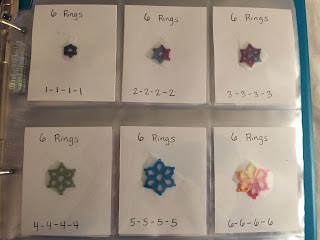 The binder is a new side project that I've been working on. Every time I have spare thread left on my shuttles, I tat a small ring formation. I bought a pack of trading card sleeves to store the samples in. Each sample is taped down to an index card that has been cut in half to fit in the sleeve. 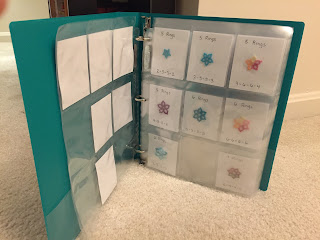 Right now I'm just tatting flower formations, but I will eventually expand the project into other small shapes. It's like having a reference book, and has already come in handy when creating new designs.
Posted by Robin Perfetti at 12:18 AM 20 comments:

A couple of weeks ago, I noticed that I had accumulated a lot of unfinished projects. A cross, a bookmark, a few small doilies...all the result of design whims that got set aside. In an effort to free up some shuttles, I took the time to finish most of these small projects. One of them was an alternate version of the floral coaster that I worked on in January. 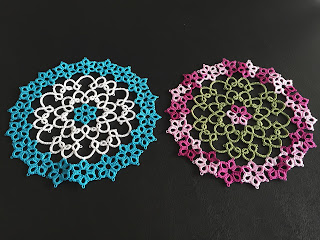 This is a follow up of an idea I had while working on the original concept of the doily. I wanted to try making the flowers smaller and increasing the number of flowers used in the last round (from 12 to 18). I think it gives the doily a more balanced look.

As I had done previously, I worked this pattern backwards. I tatted a circle of 18 flowers first, and then created a center to fit. 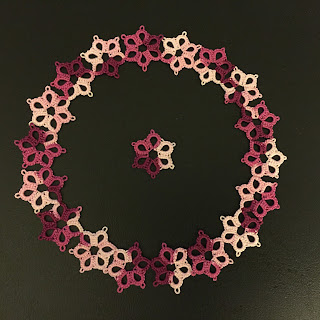 I really like this method for projects that have a time consuming outer round. It saves from having to cut and redo the last round when things don't work out. Instead, the inner rounds (which take much less time to tat), are cut off and redone.

Last week was also Billy's birthday. He turned 9 years old on February 28th. We buy him a cupcake every year so we can take a photo. We don't let him eat the cupcake, and normally he isn't interested in it at all. This year was a little different: 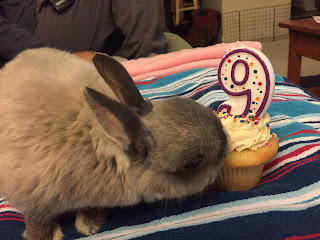 In his old age, Billy has developed a bit of a sweet tooth. He sampled the frosting and cupcake, but then decided to go back to his bowl of celery.

Which reminds me, I never posted my completed Tat it and See. Here is the rabbit that Jane Eborall designed this year. I didn't have any orange thread for the carrot, so I made a stick of celery instead. Billy doesn't like carrots anyways :) 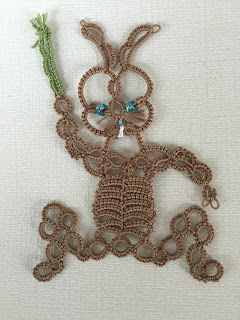