Three more snowflakes are fresh off the blocking board: 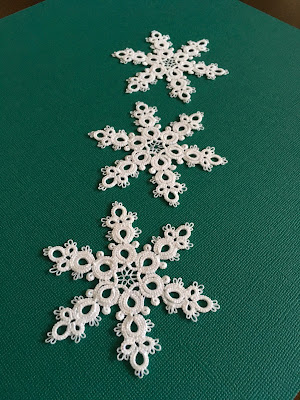 The pattern for these can be found in my Etsy shop by clicking HERE. Also, a reminder that my Etsy sale is ending tomorrow, and my next sale will be sometime in early June, 2019. If you want to visit my shop, you can do so by clicking HERE.

My blocking board doesn't have lines for a six pointed motif, which made things a little more difficult. Next time, I'm going to print out an appropriate polar grid (using Inkscape) and place it in a plastic sleeve to use as a blocking template.

These snowflakes have been stiffened with Mod Podge Extreme Glitter. The sparkle is very pretty in person but doesn't show up on camera unless the photo is blurry: 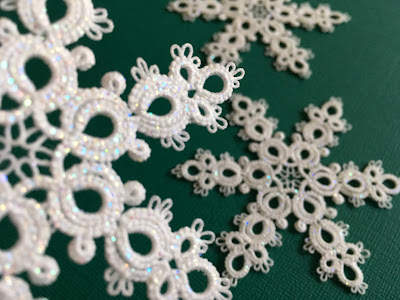 It's a multicolored glitter, similar to the AB color used in beads. I will be stiffening all of this year's snowflakes with the glittery Mod Podge and see how they hold up over time.
Posted by Robin Perfetti at 11:24 AM 8 comments:

When the new Liz Metallic threads came out, I was excited to try them and potentially use them for snowflakes. I had high hopes for the Iridescent color, but found it difficult to work with and not as sparkly as I thought it would be. I ended up making a few snowflakes in Liz Metallic Silver but still longed for a white snowflake with sparkle.

I started brainstorming: Maybe I could mix Mod Podge with glitter and use it to stiffen a white snowflake? I wanted to do a bit of research online to see if anyone had done this before, and found that Mod Podge actually has a product with glitter already mixed in! It's called Mod Podge Extreme Glitter. I was able to find some at my local Michael's craft store: 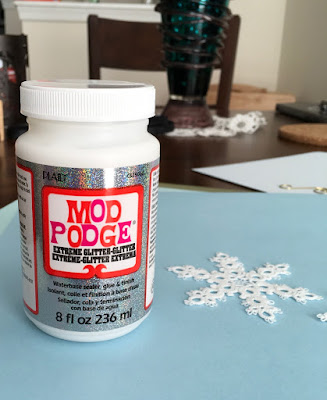 I placed my snowflake on plastic wrap and used a foam brush to paint both sides with Mod Podge. I then blotted out the excess stiffener with a paper towel and laid the snowflake on a fresh sheet of plastic wrap to dry for 24 hours. I'm really pleased with the results! The snowflake is stiff (great for ornaments) and very sparkly. It's hard to capture in photos and seems to show up better on camera in low light: 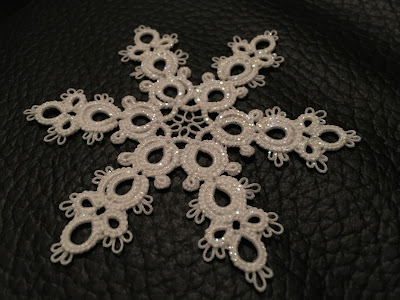 More glitter shows up when the camera is out of focus: 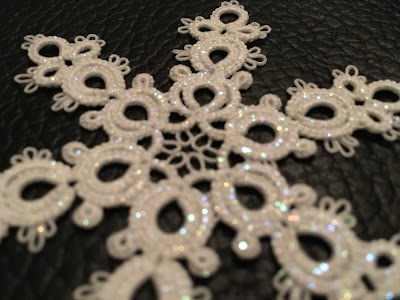 If you have access to this product, I highly recommend trying it out. Maybe start with something small to make sure you like the results before using it on something that took a while to tat. The Mod Podge does add some thickness to the tatting, so be sure to blot pretty thoroughly after applying it.

This snowflake is one that I designed fairly recently. I started out with a small onion ring snowflake and extended the arms for a larger version. I took inspiration from Joëlle Paulson's Snowdrop pattern to extend the arms. 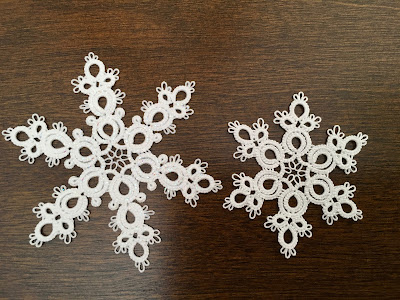 I named the above pattern Shimmer Snowflake, since it's my first project to use the glittery fabric stiffener. You can find the pattern in my Etsy shop by clicking HERE. I'm also having a holiday sale which will end on Tuesday, November 27. Everything in the shop is 20% off, no code needed. I noticed some other Etsy shops are having holiday sales as well so head on over to see if you can find any good deals :)
Posted by Robin Perfetti at 1:39 PM 5 comments:

I haven't been posting much to my blog, but I have been tatting. I put together a new magic square pattern during October. It's something I sketched on my iPad back in May and had been meaning to design ever since. 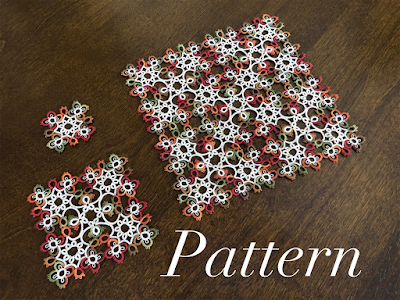 The listing can be found in my Etsy shop by clicking here. I have proofread and test tatted this pattern myself so if you come across any errors or questions, please let me know.

The samples pictured above are tatted in Lizbeth size 40 thread, Autumn Spice and Ecru. If tatted in size 20 thread, the medium sized square would be good for a coaster. In size 40 it's a little small, so I placed a mug on the larger square for this photo: 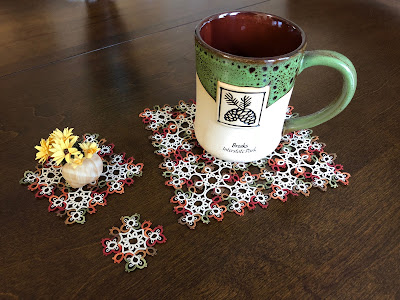 This pattern did give me trouble in getting everything lined up right. I forgot how exact the center lines need to be when designing a magic square. In the end, I got everything worked out, but it took a lot of attempts: 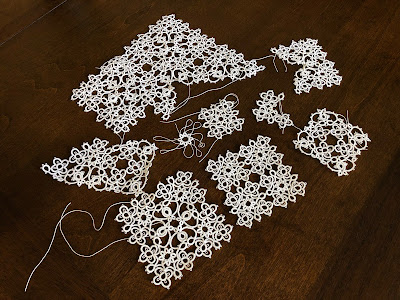 In the photo above, the rightmost square is what I like to call an "inverted" square. If you are familiar with my Designing Magic Squares post you will recognize that term (see Part 4: Expanding the Square). For this pattern, however, I felt that the inverted squares didn't look as nice so I did not include instructions for them. The edge for the inverted squares would be the ecru edge pictured below: 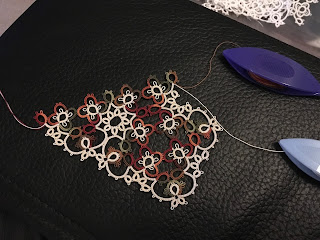 Anyhow, I've probably gone into too much detail about that part! Now that this pattern is done it's time to get back to work on my table runner. I also should start making some snowflakes for the holiday season.
Posted by Robin Perfetti at 10:39 AM 9 comments: