I recently received an email from Norway, from a tatter named Liv Strind, asking about using a few of my free patterns for their guild's upcoming magazine. Liv also attached a beautiful photo of her tatting, which she gave me permission to share: 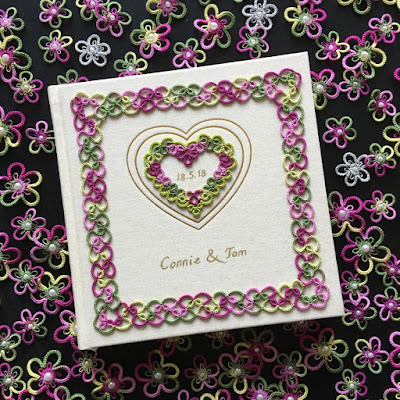 This was made for a wedding book. I just love the combination of tatting, the colors, and the flowers in the background. The edging is from Sumie Tatting 2, and the heart is one of the patterns from my Etsy shop. Liv said the background flowers are from a basic, older pattern, and graciously sent me a PDF file with instructions on how she attaches the central bead. I've been meaning to learn more about adding beads to tatting, and the central bead is a technique that I haven't done before. I hope to give it a try sometime soon!
Posted by Robin Perfetti at 1:24 PM 3 comments:

Over the past month I've tatted a few things using the new Liz Metallic thread. The sparkle is so hard to capture in photos. I think it comes through a little bit when taking close ups of the tatting: 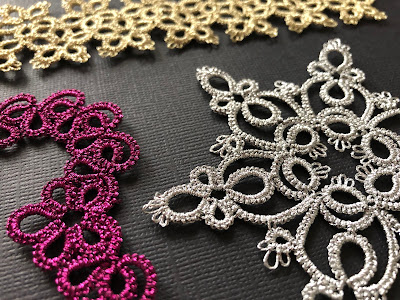 The snowflake is something I made earlier, when I was rewriting one of my Etsy patterns. It's made in Liz Metallic Silver. After that, I tatted the heart in Raspberry Pink, and the bookmark in Sand Dollar: 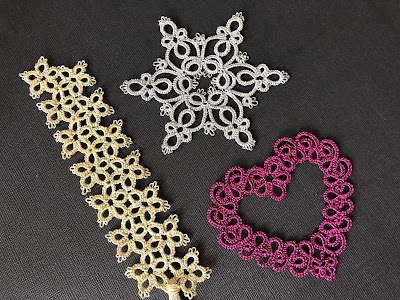 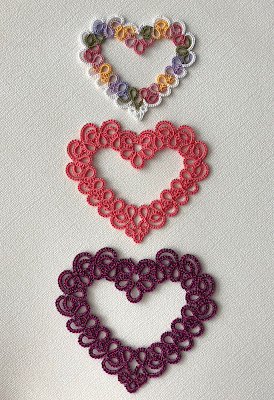 Here's the metallic bookmark photographed next to another bookmark made in Lizbeth 20 Pink Parade: 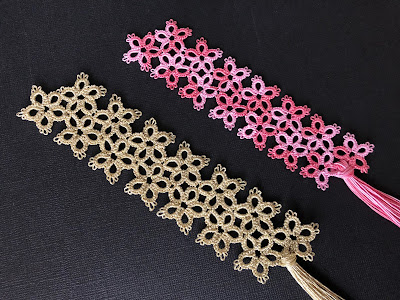 The tassel threads in the metallic tend to separate, but so far the tassel knot is holding up fine: 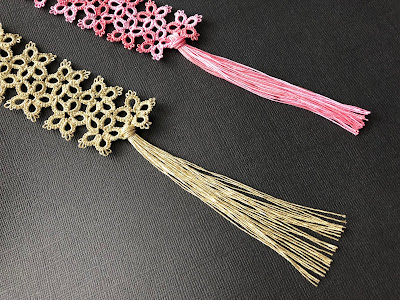 I do like the stiffness of the metallic thread, especially for snowflakes. I'm thinking of using it to make snowflakes for holiday cards this year. I will have to limit my tatting time with the metallics though, as they are much rougher to work with than cotton.
Posted by Robin Perfetti at 3:08 PM 9 comments:

Bookmark patterns are in the shop

After many months of designing, writing, and testing, the bookmark patterns are finally available in my Etsy shop! You can click HERE to go directly to the listing. 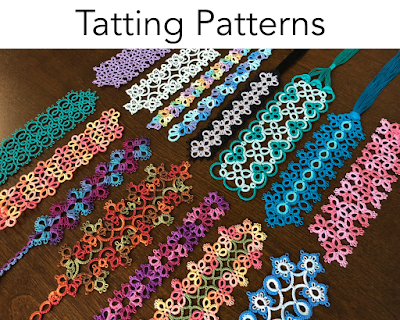 There are more photos within the listing that show all of the designs. Thanks again to everyone who helped with the test tatting. If you test tatted these and did NOT receive the final version of the ebook, please let me know.

A few days ago, Etsy was having some issues that caused a delay in receiving instant downloads. It looks like it has cleared up now, but if you encounter any issues don't hesitate to contact me. I can send files for any patterns in my shop.
Posted by Robin Perfetti at 9:57 AM 8 comments: