I made a few minor adjustments to one of my doilies and tried tatting it in two colors. In the beginning, this was progressing well...but as the doily came together I realized just how much contrast there was between the two colors:


This is done in Lizbeth size 20 Seagreen Light and Seagreen Dark. I still like the placement of the colors, which gives an outlining effect when seen from far away. I think I will try this again in colors that are closer together in shade.

A little while ago, I made a post about measuring yards of thread used in tatting. I was doing it the old fashioned way, measuring how much thread I loaded onto each shuttle, tatting the piece, and then seeing how much thread was left over. I have had a few people point me to tutorials by Sherry Pence and Karen Cabrera, in which the amount of thread is calculated beforehand. Sherry has a written tutorial on her blog, and Karen has a video (which I believe is based on Sherry's blog post).

(Aurora's tatting helper has also been mentioned, but I haven't gotten the chance to check it out and have to access an older computer to retrieve the bookmark for the site.) Edited to add: Phyllis has provided the link for the TatHelper website, you can access it by clicking here.

I should mention that Sherry advises adding some extra to each measurement to account for picots and core thread. What I find interesting is that the light green thread didn't need any extra. In fact it used less than the amount calculated. The dark green thread required about 1 extra yard. Luckily, I erred on the safe side and had plenty of thread on my shuttles to complete Round 2 in one pass.

Over the past several months, I have been taking notes on the amount of thread used for different pieces of tatting. I think it's time to make a spreadsheet to see how the actual thread usage matches up with Sherry's method of calculating.
Posted by Robin Perfetti at 3:07 PM 31 comments:

I've been taking part in a few of the online Tatting Designer's Classes that meet every Tuesday on Chatzy. Sometimes they talk about keeping a notebook to store design ideas, notes, and patterns. All of my sketches are made and stored on my iPad, so I don't have a notebook for that. What I do have is a design binder, where I put samples of my finished pieces as well as written instructions for completion. Earlier this year, I noticed that my binder was getting quite full, and it was time to get a new one. 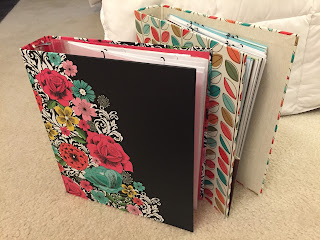 The old binder (the one in back) holds about 20 patterns that I designed or adapted from 2014 to 2015. Some of these have variations so there are more than 20 pages in there. The reason it doesn't hold more is because I put a sample of the finished tatting into each plastic sleeve, which adds a lot of bulk to the binder: 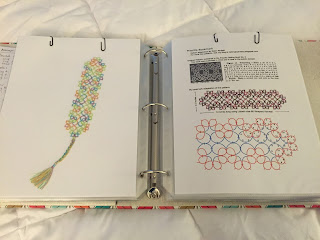 I blogged about this binder a few years ago when I was first starting it out. I've made about 10 patterns per year, and if I continue at this rate my new binder will be filled by the end of 2017.

Right now, the new binder just has a few small doilies in it. This is the latest one I am working on, which still needs some adjustments: 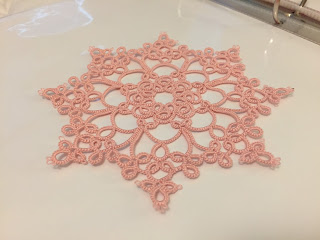 I'd like to make the points a little smaller, and make a couple of other changes so that the doily lays flat. I think this would look interesting in two colors, using one color to outline the other.
Posted by Robin Perfetti at 2:13 PM 11 comments: