I got distracted again...

As I was looking over the floral doily and coasters that I designed earlier this year, I wondered why I didn't try a five petaled version. I opened up my binder of tatted samples, found a five petaled flower and started designing. Here is the finished doily in size 20 and size 40 thread: 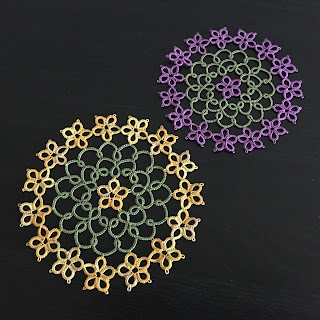 This lays better than the previous design so I think I will use it in my upcoming pattern pack instead. Which brings up the question of what to do with designs that don't quite fit my standards. Would you like to see them offered as free patterns?

I haven't given up on the floral coasters, and I'm super close to getting them down to three rounds (they were originally four which I thought was excessive for such a small piece of tatting): 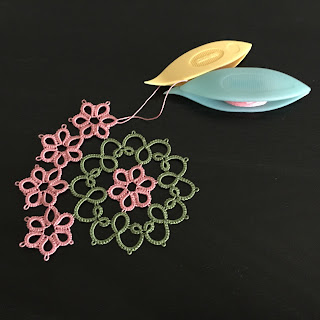 If you've ever wondered why it takes me so long to get patterns completed and written, now you know!
Posted by Robin Perfetti at 2:06 PM 9 comments:

My exploration of mini doilies and coasters has come to an end with this square design: 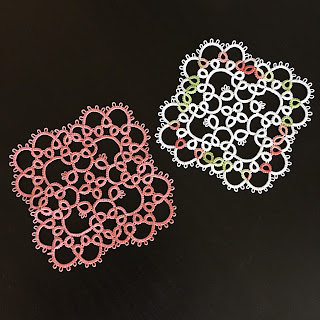 I drew this design a few years ago, when I had first stumbled upon the Kaleidoscope Drawing Pad app. At that time I wasn't aware of the behavior and limitations of ring and chain placement, and simply drew something that I thought would be aesthetically pleasing. I saved this pattern for last because I knew it would be a challenge and would require some deviation from the original concept. Here is the drawing side by side with the tatting. I think it came out pretty close to what I had in mind: 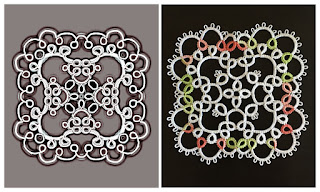 As always, it took a number of attempts to get here: 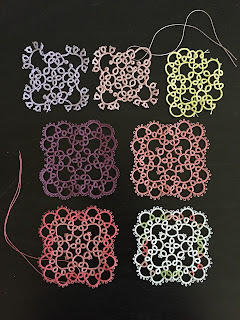 The attempts are displayed from left to right (like the page of a book) with the final being the white coaster in the lower right corner. I really should have stopped at the pink version above it but I wanted to play with colors and try a slight alteration in stitch count. In the end, I will be using the stitch count from the pink version as it has a bit more wiggle room for differences in tension.

Next I will be making some small edits to a couple of previous coasters and then it will be time to write up everything on the computer.
Posted by Robin Perfetti at 3:59 PM 9 comments:

I've been spending a great deal of time looking over the first and second editions of Angeline Crichlow's Let's Tat, and have been finding a lot of things that make each book unique. I suppose it's inevitable in a self-published, hand bound book that has been written on a typewriter. That's part of what makes Let's Tat such a treasure.

What I've also noticed is just how much work Angeline put into creating each one of her books. When you factor in the amount of pages, the hand binding, the corrections that have been applied directly to the page, and the level of detail that she went through to explain each concept in tatting, it truly is a labor of love.

Let's take a look at some of the interesting things I found in each book.


Differences Between the Two Editions:

The first edition was published in 1979. 100 copies were made, each numbered and signed by Angeline Crichlow. The second edition was published in 1981 and approximately 400 copies were made. Unlike the first edition, the second edition is not numbered and the inside page has a photocopy of Angeline's signature:


The leather bound cover of the second edition came in different colors. Mine is brown, and I have seen photos of green, yellow, and burgundy covers as well. As far as I know, the first edition only has a burgundy cover. (If you have a first edition that is NOT burgundy, I'd love to hear about it!)


The ribbon bookmarks also came in different colors. I have seen burgundy, red, hot pink, and green. Gold lettering on the cover has different spacing, placement, and clarity on each book.

If you turn the book to the side, you will notice "Let's Tat" hand written on the spine in gold pen. For some reason, this is missing from my first edition copy. I looked for signs of it having been rubbed off, but it looks like it was never there. This may be unique to my copy (I think Fox's first edition has the title on the spine, as seen in a post by Ann when the book was traveling the world).


The second edition has more pages (353 as opposed to 332). This is because a few extra patterns have been added and some unnumbered pages have been incorporated. The second edition also has an address change and other information that has been glued to the pages of the book. For the sake of privacy I'm not including any photos of addresses, but here is a page from the end of the book where additional titles have been added:


The second edition has five generations of tatters. Angeline's daughter Jeani has been added:


Look closely and you will see that Angeline's year of death has been written in blue ink in the second edition. I believe this was done by her daughter, as the same blue ink is used to correct her daughter's address a few pages back. This book must have been one of the last copies sold.

The above photo is also a good example of the print quality in the second edition. It appears to be photocopied throughout, rather than the offset printing seen in the first edition.

Perhaps the most interesting thing about this book is the way in which typos are corrected. White out, black pen, red marker, and glued bits of typing can be seen throughout the pages (this is exclusive to the first edition). Although some corrections were done to the master copy before it was sent off to the printer, there are loads of edits done to each book by hand. Multiply that by 100 first edition copies and you will begin to see just how tedious of a job it is.

There are seven instances where typing has been cut out and glued on top of typos. Here are a few examples:

There is also a photo glued to the bottom of page 12. This was super difficult to spot (I had to run my fingers over the page to feel the extra layer).


In total there are 8 glued corrections in my copy of the book. If Angeline did this with all 100 copies, that is 800 little pieces of paper that were cut and glued!

There are other types of corrections as well. White out and black pen were used to fix certain misspellings:

Later page additions, marked by the letters "xx" contain red marker to signify colored thread. I suppose this was her only option as the entire book is in black and white. Notice the white out correction on the same page:


In total, I was able to find 40 corrections applied by hand (the group of red markings above was counted as 1 correction). If Angeline made these corrections to every one of her original 100 copies, then that means she made 4,000 corrections in all. Can you imagine? I hope she had someone helping her!

While carefully examining the pages of the first edition, I stumbled upon a number of uncorrected typos. Here is a sampling:

A couple of these were remedied in the second edition of the book, but for the most part, they remain uncorrected in both editions.

The majority of my time was spent looking through the first edition of Let's Tat. However, as I was comparing errors between the two editions, I noticed that my second edition seemed to be missing pages! 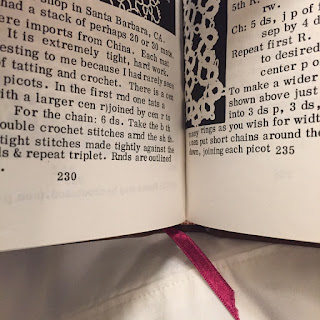 I swear I had seen page 231 somewhere, and after careful searching I found it: 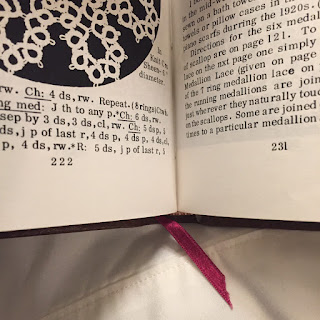 Something must have happened in the bookbinding process and a few of the pages got mixed up. Luckily they are all there, just misplaced.

Sprinkled throughout the pages of the book are stories from Angeline's childhood and adult years. I especially like the story of creating a volleyball net when she was a school teacher in Arizona: 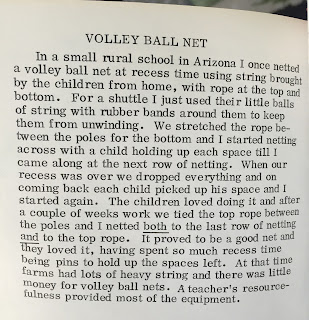 You can really see Angeline's resourcefulness in this excerpt. This same ingenuity is what enabled her to create Let's Tat with very limited technology. I greatly admire her for it, and it's a major reason why I am such a fan of this book.


Well, that's it for this post. I hope that my analysis gives a window into just how much time and effort Angeline put into creating this book, and that her dedication will inspire some of you. It sure has inspired me!
Posted by Robin Perfetti at 3:58 PM 9 comments:

The other day, I was browsing the Internet and randomly decided to search for Angeline Crichlow's Let's Tat. For those of you who are unfamiliar with the book, it is exceedingly rare. Only about 500 copies were made, and each was hand bound by Angeline Crichlow herself. This book is so rare that the last time I saw it for sale was nearly two years ago. That copy was a first edition (#33 of 100) and auctioned for $242.50 on eBay.

With the magic of Bookfinder.com (and A LOT of luck), I found a copy of Let's Tat available on Amazon for $10 plus $3.99 shipping. I have no idea how long it was up there, but I snatched it up right away! 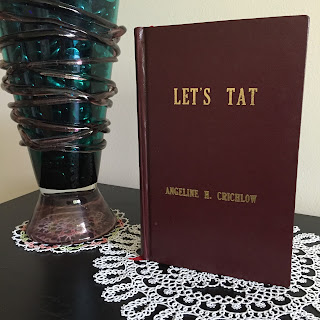 This book was listed as a second edition, published in 1981. I was pleasantly surprised when the book arrived in the mail, and I saw this: 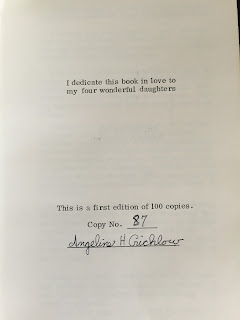 Several years ago, I received the second edition of Let's Tat as a birthday gift (and yes, it was rather expensive). The second edition was published in 1981 and has extra content as well as fixes for several typographical errors seen in the first book.

I've been having fun comparing these two books and discovering a whole lot of quirks! I think I will save those for the next post so I can take a little more time with the books. Here are the two editions side by side: 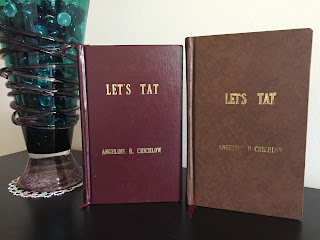 I love how each book is unique. Just from first glance you can see the difference in leather color, book size, and placement of gold lettering. If you look really closely, you may notice that the burgundy book has a red ribbon while the brown book has a burgundy ribbon. (The copy of Let's Tat that I checked out from Interlibrary loan was burgundy with a hot pink ribbon!)

The majority of Angeline's books seem to have a burgundy cover, though Amazon.com has a photo of a green version of the book, and Leigh owns a copy with a bright yellow cover. I wonder how many different colors are out there? Okay, I think I'm having a little too much fun with this! I'll be back later this week to post about all of the quirks I have found in my two copies.
Posted by Robin Perfetti at 2:55 PM 10 comments: