I'm starting to get burned out from writing Inkscape tips, which is a sign that I need to pace myself better. I tend to go into things with the idea that I am going to take it slowly, and then I never do. I'm still super excited about diagramming though, and I feel a bit like a mad scientist in that regard :)

On the design front, I've been revisiting a pattern that I designed back in March of this year. Just before designing this motif, I had watched one of my favorite movies: The Company of Wolves. The main character is named Rosaleen, and for lack of a better idea, this pattern was called Rosaleen.

There was some interest when I posted photos in my Works in Progress post, and I figured that I really should finish diagramming this pattern before the end of the year. When I do, I will post it to my Free Patterns page.

I tatted another copy last week, just to make sure that the notes I had were accurate: 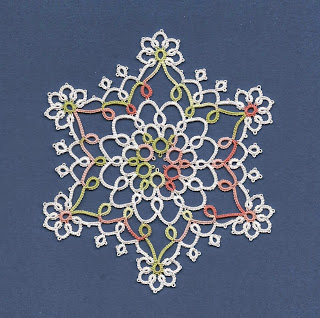 This motif can also be connected together to form a hexagonal mat. I'd still like to tat a fifth round, which would be an optional addition to turn this pattern into a coaster. I'll have to see how that goes and if I can come up with something that I like.

I don't want to bore you all with too much diagramming stuff, but I think I have really benefited from taking the time to research Inkscape for my tutorial. I was able to create this diagram with some new things that I learned, and it was so much easier than what I had been doing before: 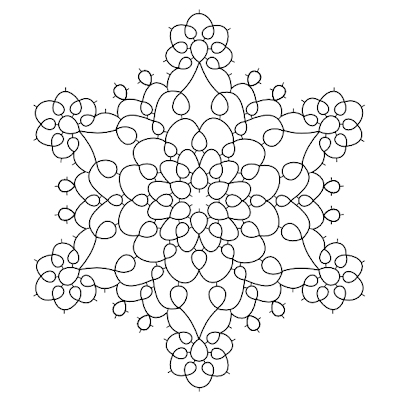 Here's a snapshot of my Inkscape screen. I've used an imported photo to draw on top of, layers to work each round individually, and guides to snap a point of rotation to the center of the diagram. All things I hope to share later on in my tutorial. 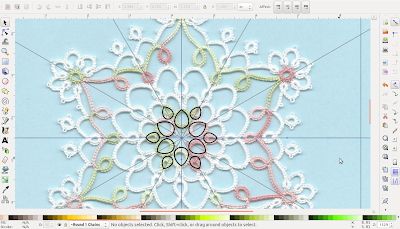 Now I just need to work on that fifth round, colorize my diagram, and add some numbers.
Posted by Robin Perfetti at 11:43 AM

This is very beautiful and I have enjoyed tatting your patterns, they lay nicely and look so artistic too, thanks cant wait to try this one :)

I just now realized that you have been posting this amazing tutorial series, and I'm so impressed with both this beautiful pattern and your tutorial. A few months ago I tried to do the 'overlay' of a photo with Publisher (latest version) , and have had some success, but the chains still give me headaches. I will be investigating this free Inkscape program ( compatible with Windows!) , as it seems to do the job nicely. I like the teardrop shape, too. I really appreciate your sharing all of this with us! That has to be a lot of work!

Wow! Your tutorial series is *really* valuable! I am a really vocal Inkscape fun, but I admit I do not use it anywhere near its full potential. I really look forwards to the layers, and rotation point snaps explanations!

Enticing, enticing , ....you are the ultimate enchantress , Robin ;-) !
Looking forward to both the coaster pattern (I like it as it is without a 5th row, but knowing you, you can really come up with a another gorgeously elegant finish), and the continuation of the Inkscape series.
I'm actually glad you are taking a break from the latter, coz that will give me time to practice & play around some more ;-) Too many things demanding my attention right now.
Hugs

I love this motif, it's charming. I've sometimes drawn onto photos, it helps me drawing only one sector, then grouping all, copy and rotate.

I love this motif.. It is wonderful!

It is helpful to see your process for designing. Thank you for sharing your tips and patterns.

That is a beautiful motif and I love the way your colours run though the design,
Thank you for sharing your tips and how to knowledge.
Margaret

Pacing oneself is a good idea. In the meantime, I am selfishly enjoying your products! The Inkscape tutorial is great. I took the design class, but one must keep using Inkscape and stay up to date. Your review helped me and I also learned from it.
What colors did you use in Rosaleen? I love them.

Yep, that's what I do too. It's a real time saver to draw only one section and let the program do the rest for you :)

Hi all, I'm glad to see that there are so many who are interested in learning about creating diagrams! I was afraid that I had been junking up my blog with boring tutorial posts. When it's all finished, I hope it will be a useful tool to get more people into diagramming...and designing :)